The Teen Driving Safety Research team at CIRP is currently conducting research on neurodevelopmental differences and driving to examine rates of licensure and risk of crashing for adolescents and young adults to help establish the epidemiologic foundation for future translational research. One-third of autistic individuals without intellectual disability obtain their driver's license by age 21, and two-thirds of autistic adolescents of legal driving age without intellectual disability are either currently driving or plan to drive, according to research conducted at CIRP.

This unique program of research on neurodevelopmental differences and driving is led by Allison E. Curry, PhD, MPH. Her research involves linking data from two sources: 1) electronic health records for over 114,000 CHOP patients born between 1987 and 1995 in NJ, and 2) the New Jersey Safety and Health Outcomes (NJ-SHO) Data Warehouse, a rich unique database that includes the full licensing, citation, and crash history of every NJ driver. The research is being conducted in collaboration with the Center for Autism Research at CHOP and the Center for Management of ADHD at CHOP.

The researchers investigated data from New Jersey residents born between 1987 and 2000 who were patients in the CHOP Healthcare Network. Their electronic health records were linked with statewide driver licensing and crash databases. The data included 486 autistic and 70,990 non-autistic licensed drivers over their first four years of driving.

The study found that compared with newly licensed non-autistic drivers, novice autistic drivers were estimated to have lower rates of moving violations and license suspensions, as well as similar to lower crash rates. Although half as likely to crash due to speeding, the autistic young drivers were three times more likely to crash when making a left or U-turn, suggesting the need for tailored training in these areas.

Read the press release about the research.

This study, published in the journal Autism in Adulthood, examined specialized driving instructors' perspectives and experiences of teaching autistic adolescents and autistic young adults to drive. The researchers conducted semi-structured interviews with 17 instructors and then transcribed the interviews, coded them, and summarized common themes. The results emphasize the importance of parents in supporting their autistic adolescents in making the decision to drive and learning to drive, as well as supporting and prioritizing the development of independent life skills, such as mowing the lawn, cooking, and taking public transportation, long before getting behind the wheel.

According to the research, best practices to inform assessment and instructional approaches are urgently needed to help guide these professionals in teaching young autistic individuals, as well as others with neurodevelopmental differences to drive. However, driving instructors also recognize that specific approaches will necessarily be tailored to meet the individual and unique needs of each autistic adolescent driver. Future research will explore the knowledge and needs of healthcare providers, who are often a trusted resource for families as their autistic adolescents’ transition to adulthood, as well as the knowledge and needs of parents and autistic adolescents. With this knowledge, tools can be developed to promote driver readiness and enhance the learning-to-drive process for those with neurodevelopmental differences.

This study, published in the journal Autism, found one in three autistic adolescents acquire an intermediate driver’s license, and the majority does so in their 17th year. The vast majority of autistic adolescents who receive a learner’s permit go on to receive their license within two years after becoming eligible, suggesting that families are making the decision of whether their autistic adolescents will learn to drive and pursue a license before getting behind the wheel with a learner's permit.

Researchers conducted a unique linkage of more than 52,000 electronic health records (EHR) of children born from 1987 to 1995 and NJ driver licensing data to determine current rates and patterns of licensure among autistic adolescents (without intellectual disability) and those without autism. This is the first large-scale study to provide detailed information on the number of autistic adolescents who are licensed and the rate at which they progress through the Graduated Driver Licensing (GDL) system. Nearly 90% of autistic adolescents holding learner's permits received an intermediate license within two years, at a median rate of 9.2 months later than other adolescents.

This study provides evidence to support the development of interventions to meet the unique needs of autistic adolescents who want to drive.

Watch a Medscape video about what clinicians should know.

Chronic Care for ADHD: Clinical Management from Childhood Through Adolescence

Published in the Journal of Developmental and Behavioral Pediatrics, the findings raise concerns about how primary care providers manage adolescents with a history of ADHD: Discussions of medication diversion and driver readiness were essentially not documented, and monitoring for risky sexual activity occurred in only about half of the adolescents. Improvements in monitoring for risky sexual behavior and driver readiness and providing patient education about medication diversion are needed.

Funding: Maternal and Child Health Bureau, Health Resources and Services Administration, US Department of Health and Human Services, and the Eunice Kennedy Shriver National Institute for Child Health and Development

Read the the study abstract.

Read a press release about the research.

Longitudinal Study of Traffic Crashes, Violations, and Suspensions Among Young Drivers with ADHD

Building on a previous JAMA Pediatrics study described below that found crash risk for adolescent and young adult drivers with attention-deficit/hyperactivity disorder (ADHD) is much lower than previously reported, this study published in Pediatrics implemented a unique linkage of more than 14,900 electronic health records of children who got licensed during the study period with NJ driver licensing, traffic violations, and police-reported crash data. Within this group the researchers identified 1,769 adolescents with childhood-diagnosed ADHD and compared their crash outcomes and traffic and moving violations with those of the drivers without ADHD.

They found that young drivers diagnosed with ADHD are significantly more likely to crash, be issued traffic and moving violations, and engage in risky driving behaviors than their peers without ADHD. Although crash risk is elevated for all newly licensed drivers, the study team found it is 62% higher for those with ADHD the first month after getting licensed, and 37% higher during the first four years after licensure, regardless of their age when licensed. Drivers with ADHD also experienced higher rates of specific crash types, including driving with passengers, at-fault-, single vehicle-, injury- and alcohol-related crashes, the last risk being 109% higher than those without ADHD.

Comprehensive preventive approaches that extend beyond current recommendations are critically needed. To help inform these recommendations, the research team plans to conduct additional prospective research to better understand what happens right before adolescents with ADHD crash and the specific mechanisms by which ADHD symptoms influence crash risk.

Published in JAMA Pediatrics, this is the first large-scale study to provide detailed information on the proportion of adolescents with ADHD who acquire a driver's license and their crash risk as compared with other newly licensed young drivers. Researchers followed a cohort of 18,522 primary care patients at CHOP who were born from 1987 through 1997 and linked their electronic health data with New Jersey driver licensing and crash data. They identified 2,479 adolescents with ADHD and 15,856 adolescents without ADHD who were age-eligible for licensure to determine the association between ADHD and driver licensing. Looking at only those licensed (1,785 with ADHD and 13,221 without ADHD), researchers analyzed factors related to crash involvement, such as gender, licensing age, and/or being prescribed medication 30 days before getting licensed.

After acquiring a driver's license, adolescents with ADHD have an estimated 36% higher motor vehicle crash risk than other newly licensed teens. This risk persists during their initial driving years, regardless of gender or age when licensed. Although elevated, this risk is far lower than the commonly reported estimate as four times higher.

Based on EHR data, only 12% of the drivers with ADHD had been prescribed an ADHD medication by a CHOP doctor in the 30 days before getting licensed.

Read a blog post about neurodevelopmental differences and driving research.

Watch a Medscape video about what clinicians should know about driving with neurodevelopmental differences.

View a study recruitment flyer about this line of research.

Learn why this line of research is so important from Patty Huang, MD, CHOP researcher and developmental pediatrician in this video: 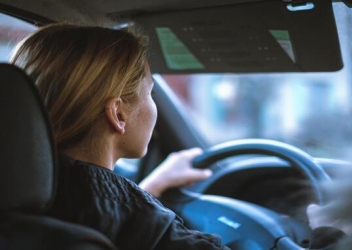 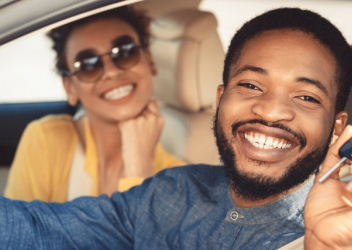 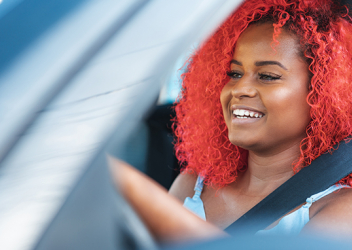 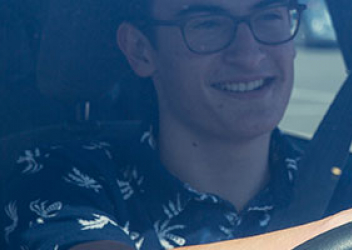 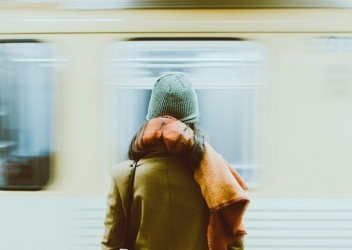 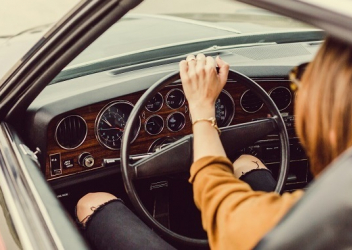 Crash Risk Is Manageable for Adolescent Drivers with ADHD 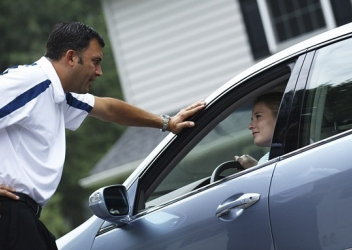 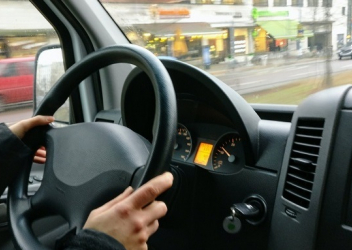 Beyond Current Recommendations for Adolescent Drivers with ADHD 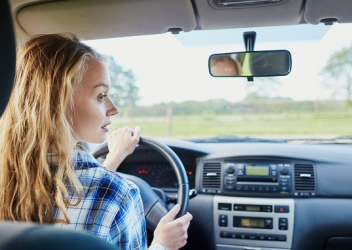 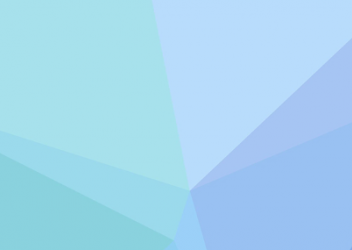 Teens with ADHD Get More Traffic Violations for Risky Driving, Have Higher Crash Risk Regardless of Age When Licensed 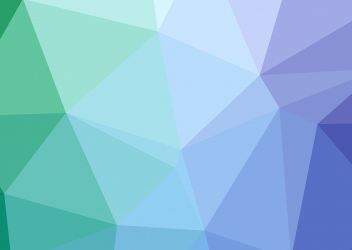